Obviously not good with the old PC, tried and failed to get this post up three times, no Idea where the first one went after hitting post, second one lost when power died on laptop, third after i magically hit ctrl, alt and something else or the like and now here I am 4th time is a charm.

No harm as I have no photos yet but...
Picked up my p Reg. Justy last weekend, all the way from Wales. Neatish and tidy metallic green 3dr with 70K on the clock. Came with  a few spares and a TV, dvd, mp3, phone, satnav, radio, cd head unit that came from the sellers fathers old car...bonus! Also had air in the tyres.
Drove back to London after doing the deal in what was weighing up to be a record time until I hit Kensington...damn satnav, suppose it wasn’t to know about the roadworks or 2 protests I met between there and Bethnal green. 2.25 hours Wales to Kensington, 2.5 hours the last 5 miles. But the car behaved brilliantly as you’d expect from a relatively young car.
Anyway bought it as a toy thing to give me something to do at weekends and travel this small island visiting parts of the UK I haven’t been to before.
On the way I intend on doing the following:
15 inch alloys
Lower it about 50mm or a bit more (koni or Gaz or other)
Phase2 mk2 GTi exterior (bumpers lights, bonnet guards sideskirts and bobtail spoiler)
GTi interior
GTi rear brakes,
Wildwood fronts
And if time permits a GTi engine

So if you have or know of any of the parts, sort of around London town, required to do the above let me know

nice one dude you got it then get some pics up

so here are the photos...nothing much to look at but use your imagination!
The collection of parts starts here...

and to prove Im a suzuki fan my Nurburgring hire car!!!!

here are some photos of the new wheels.
waiting for a spare carpark space to become available to park the donor GTi. Not sure the predominately office class residents are going to be too keen on me banging away in the driveway of our gated community...but tuff luck I pay rent and Tax.

Looks good with those wheels 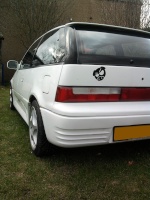 looking better and what do you mean if time ? you going back to oz?

work contracts and visas expire in January so after 5 years we may be Oz bound. so the car is an attempt to see as much of the Not-easily-seen-by-train-UK as possible. Of course things may change, new projects, that enticeus to renew our visas?
Plus with so much driving I may not have time to fit it...see what happens

Nice find... looks clean under the bonnet and most of them have a bit of surface rust around the rear diff cradle.

I was pleasently surprised to find the front wings lower bolts came off without any dramas. no drills needed. all seam sealent in place. wish the damn mud flaps were as easy, screws filled with crap so cant get driver into them, I will cut them! yes cut them
cheers,
GTP

Finally the rain broke so got a good few hours on the car
headlights and bonnet on, need bumper irons so I can fit the correct bumper...whod have though they would be different

Side skirts on too. These are just held loose with self tappers for alignment while I await the plastic plugs to screw into

And rear spoiler...this was too easy as the holes were already marked with the inner panel of the hatch, just drill through the outer skin from below and hey presto.

what colour is it going to be?

Hmmmm
color
If I can get all the parts together first!
hoping before summer is out to have everything above the glass line and bonnet in satin black and the body below glass line being flat/satin bright green!...If I can find someone with a place to paint, as Im doing that myself. otherwise it will go next door to the bodyshop and Ill have someone blow over same green it is
well thats the plan this day, ask me again tomorrow and it may change.
cheers,

well its beginning to look like a car again, ebayed a set of bumpers with mounting brackets and discovered the front end was junk. mounting bracket was bent in 3 directions so will go new on that so it all has to come off again to fit new reinforcing. Ebay seller claimed bumpers were in good condition, a split through middle of lower section and the bottom half falling off even the vents were rubbish, hate to see average condition!. Oh well rear is much better so that goes on next week.

managed to find correct sized panel bungs for fitting the side skirts so these are now secured into the sill panel after squaring off the 6 mounting holes to accept the bung...harder than I though upside down lying on cold concrete but wont pull out and fixed just like suzuki intended

so 2 New front arches, all bolts and nuts rethreaded/cleaned, panels aligned, looms grafted. Just need to do it all again next week!^(@^@$##(

still after a passenger side skirt

Bit of an update,

have had the rear end finished for a while, cut and spliced looms as it was easier than changing the whole loom, 9 wires to connect.

got some GTi seats on the weekend, scrubbed them up like new, probably replace the rear pocket as the backing boards are soft and bent...but look and feel great for the money.

unfortunately in putting the seats in last night discovered a wet patch onthe ground, the drive around south England on the weekend saw a stone pierce the radiator so a new on is on the way...damn cheap to, so cant complain too much.
have new speakers and stereo and momo steering wheel to go in and hope to collect GTi interior door cards, spot lights and front hubs ready for wilwoods...

Also hoping to find time to undertake lowering this weekend possibly, as I also picked up lowering springs...and its still bloody necessary

you need the front driveshafts off the Swift 1600 4wd saloon to fit the gti hubs and justy gearbox.

Can you not just swap the c,v joints over

After spending the last 3 weeks at work 7 days a week I finally got some time on the car.
Not much to add other than the two wires needed to connect the power windows up are connected. Needed to find a earth...easy under the dash and needed a switched live positive. Pulled out the accessories 15amp wire from the ignition switch plug and piggy backed the lives and hey presto. working windows.
also went to the effort of glass polishing all the years of muck from inside and outside and it makes such a difference. glistening glass which slides up and down. also connected the new speakers in the rear cards and mounted the 6x9's in the parcel shelf, have bulkhed fittings but ran out of light to run wires from the front...maybe next week.
fitted GTi front door cards and got the fog lights bolted up...need to rewire the plug on the car but that can wait. anyone know how to remove a airbag equipped steering wheel?
finally managed to separate the rear caliper mounts from the hub knuckles so once the new disks and pads arrive Im hoping to mount the rear disks, all takes time which is scarce at the moment.
anyone got space and equipment available for me to blow some paint over it???
cant hurt to ask..
cheers

two screws on the side of the steering wheel and the airbag should come off, then just a bolt mate.

Cheers andy, will get to that after its MOT

singularily the worst job I have ever had to do, rear was easy took 20 minutes or so, the fronts needed the strut bolt nuts to be hacked off. all 4 were rusted shut and or rounded off. all 4 needed the nut breaker then to be turned by hammer and chisel. my left side is numb and aching from 3 hours of chiseling. Holy s..t what a task. so new high tensile bolts and copper grease should see them last for a while longer.

anyway its done just the GTi brakes to do now, waiting for a set of caliper rebuild kits and bob will be my uncle.
Also finally got the local boidyshop (next door) to quote making everything original green, How does 350 sound? if I remove all panels?
cheers,
GTP

Finally got around to installing the new rear brakes.

rebuilt the calipers, repainted the backing plates, new slotted and cross drilled disc, new bolts and bits and pieces, new EBC pads, New Goodridge hoses which dont fit.
The metal sleeves on the hoses that clip into the mounts are backwards.

anyway all bled up and bedding in.
Just have to work out what Im doing on the front.

hey nice work! what parts did you replace on the calipers i want new sills and new piston for my rear calipers where did you get your parts if you did that ?

Bought the parts through these guys
http://www.brakeparts.co.uk/
paid about 60 for front and rear seal kits, which had piston seals, dust boots, slider pins sleeve and boots, nipple covers and several internal seals for the rear calipers and assembly fluid, plus 4 new nipples.
Pistons are about 16 each from memory...do you need them?