what does this do?

Ok I know what they do and where they go...
Now you see why I need injection stuff. need standard injection to get through MOT then on with those throtle bodies

your right there is no flange for mounting the side skirts, they will sit there OK without it if they are straight and secured properly or you can get a GTi sill flange and weld on or get something similar folded up and pop rivet it on.

did you buy the whole engine off typhoon then?

no updates...have been touring the country in it again, from orkney to hastings and wales to southend on sea, done 7000+ miles and only needed to push start it once as I left the lights on.
Yes I bought that engine, been collecting standard injection parts to get through MOT then decided to export it all to australia so wont bother getting it running here. will cost 25 pounds to ship the engine so its ano brainer, wait till I have a warm fully functioning garage and do it there.
it will be easier to register withthe original standard engine in oz anyway and I couldnt find a ECU that australian tuners could use that had the right fiunctions for the right money here so its best to wait.
cheers for asking.
GTP

It arrived and now while in the warm garage I discovered rust. damn pommy cars the entire right hand sill was rusted int he lower seam taking out the floor and outer sill. so out with the grinder for some exploratory cuts

then the action cuts

Then some hole filling
inner sills

so this is next for repair. Thankfully I have found a rust free 1998 wreck that has donated all the loverly purple bits
GTP

Common place for rust to sit! sits in the lip between the sil + floor

every single swift ive had for 89 plates to my 02 is the same!

its common on lots of euros. Its the salt on th eroad. its strange though as its only on the drivers side, passenger is like new.
never seen it in Australia models.
GTP

Onto the next bits of rust, this mornings job!

while I had the wire brush out in an anti rust campaign I thought Id decorate the disks.

I have collected new front and rear arms as these look scabby and am possibly after a new AWD rear subframe...If mine is actually bad as it looks scabby too. As I said Damn british roads!!
Cheers,

and been painting things black again

so of to the sandblasters to see what remains after a good dose of abrasive blasting.
cheers

had a good day with the welder,
rear panel all watertight and solid,

also managed to finish the underside with stone chip paint, best job ever had so much fun with deadener gun I just bought, went looking for things to paint...

love a bit of restoration

All finished and sitting pretty next to the escort

I was thinking about painting my justy matt black just wondered what it would look like, id say pretty nice

, it doesnt look out of place at all. just needs clear side repeaters and indicators maybe some 13's

Not a chance of 13's, wont fit the front brakes anyway and in my opinion never look right!
the escort never had 13's and now its going to 15x8 and 15x9's

change wheels with the scort and fap!

Stripped the mismatched seat base fabric

zip ties and contact adhesive the matching one is pulled tight

matching trim for first time since I first bought it front seats from UK rear seat uppers from Sa base skin from QLD.

has come along a bit lately.

Cracking write up that, loving all the fabricating work not a big fan of Matt paint but the gti does look good in it.
What ever happened to "it's mad" cultis gti 4x4 do you ever hear of it down under nowadays? 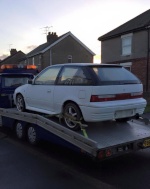 Was waiting on a few things for the escort , had a week while I waited, thought Id swap the engine in the subazuki. Baby is only 4 weeks away thought Id bring it home from hospital in a flame shooting swift.

bit of an update,
car was eventually dynoed, only one small fire as a result of a tuners mistake, a few teething problems but it runs well

with its baby sister

Given I hadn't been trackside for too long I thought id take the subazuki to Mallala for a quiet sunday drive.
Its first Australian track day wasn't kind.

It handled great, the AWD obviously working under certain conditions, the tyres were wonderful, given they are cheap but new Achillies 123 and the brakes, wilwoods on big disks were magnificent.
It made good power and was making good speed.
But the third session ended in catastrophic engine failure!
selecting 4th just before the main straight kink circa 180-190 kmh and it went pop. I pulled over as soon as possible as the cabin filled with smoke and everything behind me disappeared in smoke
Small fire was extinguished by the marshals over the cat converter when they arrived, and I was towed back to the pits.
I couldn't see anything wrong, and first though gearbox, given when it happened, which made me sweat as its the rare AWD unit. so thought Id see if it turned over, which it did, so I turned the fuel on and started it, which it managed and ran, but didn't sound healthy, Oh shit it is the gearbox I thought!
Popped my head under the bonnet and was promptly covered in oil...not gearbox oil!
killed it and removed the throttle bodies giving access to between engine and firewall. found this in the pool of oil

looked closer, and found this

and poked around and retrieved this

I'm not an expert but this looked different last time I saw it.
Looks like rod bolt failure, 2000rpm below claimed redline all day!
The head looks like its survived, number 3 piston, with failed rod has evidence of strike so I'll replace the 4 valves, probably all 16 while i'm there.

couldn't do much more damage!

So looks like rod bolts have stretched on number 3
crank journal has been hammered until rod bolt broke, peeling conrod cap off smashing sump and then the crank freed itself and next time round punched the rod out the back of the engine.
the piston has somehow triangulated the bore at the base and as you see distorted itself like techtonic plates there are probably 10 cracks or tears in the remaining piston.
shrapnel has littered the engine, half a rod bolt is wedged between cylinder wall and oil journal, such I cant move it, the head has taken a hit and bent 4 valves, cams are being tested as I had solid lifters, lifter buckets may also be toast.
the girdle braces were sheared, and 3 pistons have shrapnel marks around their skirts. so much for reusing the Arias!
So its f....ed!