Hi there, I recently bought a swift gti and In the window it as a "ssgti.com" sticker so I thought
I'd sign up and say hello.
This is the only picture I've taken 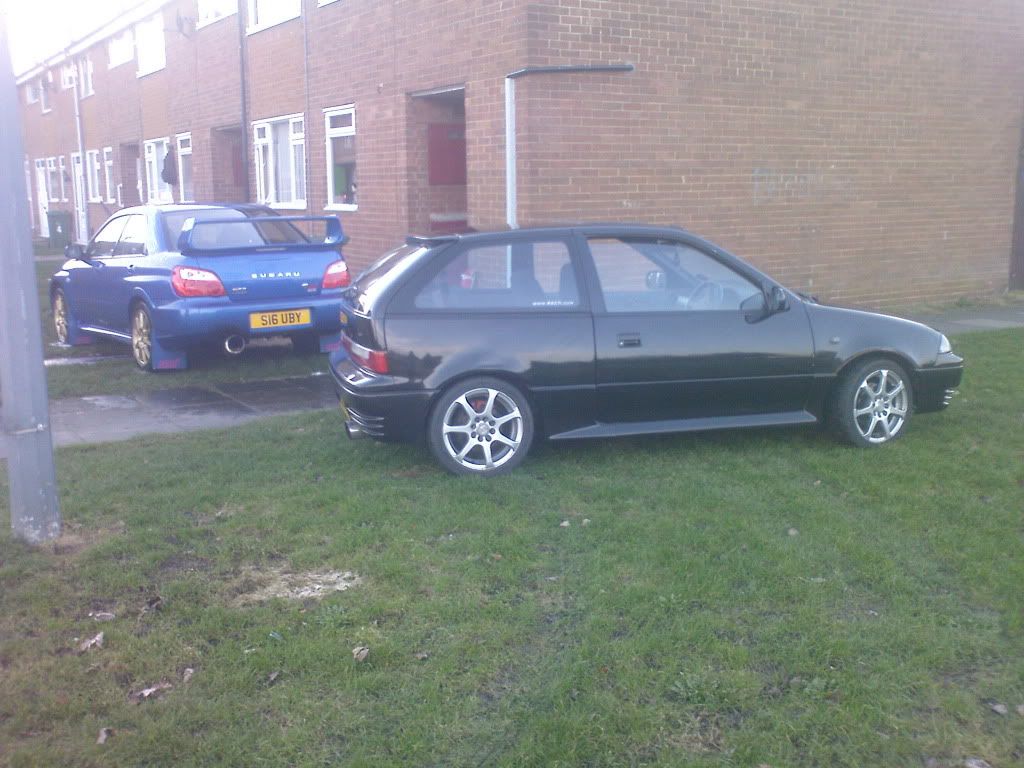 Tbh it feels a bit down on power and not quite as planted as it should be,
I think this is down to the engine mounts, I've already changed one but has not solved the sketchy-ness. I need to change the bulkhead and gearbox mounts but cannot find any, i'd perfer poly mounts if anyone knows where to find them?
I'm also looking for a standard backbox (i'm in northeast england).

this isnt ssgti.com thats another site american site, this is uk-ssgti

and you can engine mounts from
http://www.superflex.co.uk/products.php?cat=341
or ask
andy (garndi) if u want solid ally 1's

oops my mistake, still it looks like a decent site so i'll be sticking around.
that link is spot on, just what i was looking for can't work out which is the rear bulkhead mount though
cheers

Dannylad wrote:oops my mistake, still it looks like a decent site so i'll be sticking around.
that link is spot on, just what i was looking for can't work out which is the rear bulkhead mount though
cheers

Many thanks, I'm ordering one now.
danny

I can't wait till this mount arrives to see if it cures the poor handling issue.
After I have sorted the gearbox mount I plan to turbo the standard block and run low boost,
Any body have experience with these australian cast manifolds? http://cgi.ebay.co.uk/ws/eBayISAPI.dll?ViewItem&item=120609276050&ssPageName=STRK:MEWAX:IT
Work out quite cheap at £180 odd, but that's before they sting me with import taxes.

I've been using your search bar to find a list of exactly what's needed to fit the turbo and just have a few questions, 1 what's the fifth injector for and what size do I need?
and secondly, is this chip as good as it says it is? so if i socket this to fit, then there's no need for custom mapping etc?
http://cgi.ebay.co.uk/Suzuki-Swift-GTi-Turbo-Eprom-Chip-MK3-185HP-ECU-G13B-/180633376092?pt=UK_CarsParts_Vehicles_CarParts_SM&hash=item2a0e96955c

Sorry for all the questions as you can tell i'm new to swifts, bit of a downgrade in size compared to my last fast car..... https://www.youtube.com/watch?v=y77rsm9PeU8

I loved that car lol.

what time did you get wiv the vulva?

yes those manifolds will work come with a 6 month warrenty aswell for a extra 60 dollars he does a stainless steel version. i am selling the turbo chip you need for £50 at the moment only 3 avalible at this price one is pending. all new.

heres my daily how its done

dominator wrote:what time did you get wiv the vulva?

The best I managed at pod was 15.1 not much grip off the line, I later fitted a larger volvo turbo (18t) and supporting mods and made 286 at the fly but never timed it again but it felt much quicker.

heres my daily how its done

Please could you reserve me one of them chips, untill I can get the funds.
I am on a very tight budget tbh just want to get the car driving A1 before I start boosting.
Are you running the td04? what year wrx can you get them off and was yours new or used?

Many thanks and your build thread is ace, thanks
danny

hi its first come first serve at the moment but when people say they want stuff i never expect them to buy it most of the time. No i dont run a tdo4 i run a ihi vf38 similar size but twin scroll most early wrxs used a td04 there all ofer ebay all day £50-100.

STEVEGTI2 wrote:yes those manifolds will work come with a 6 month warrenty aswell for a extra 60 dollars he does a stainless steel version. 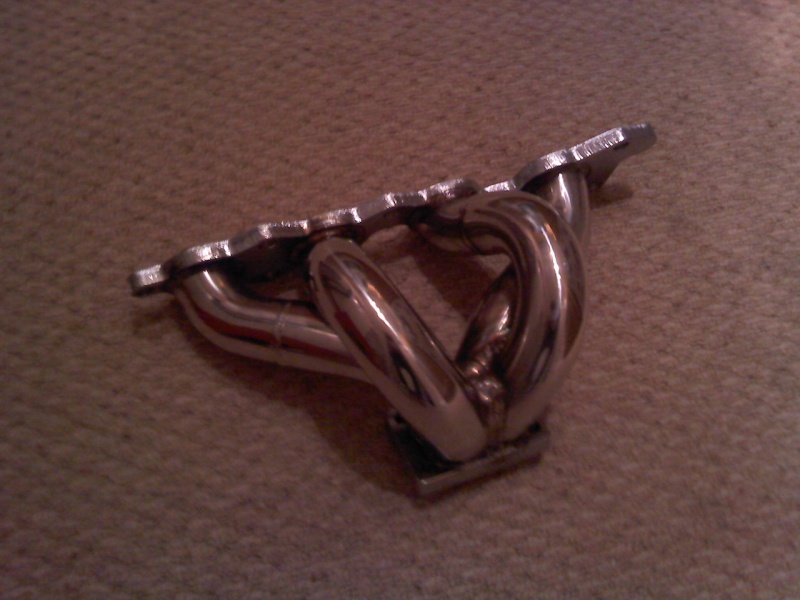 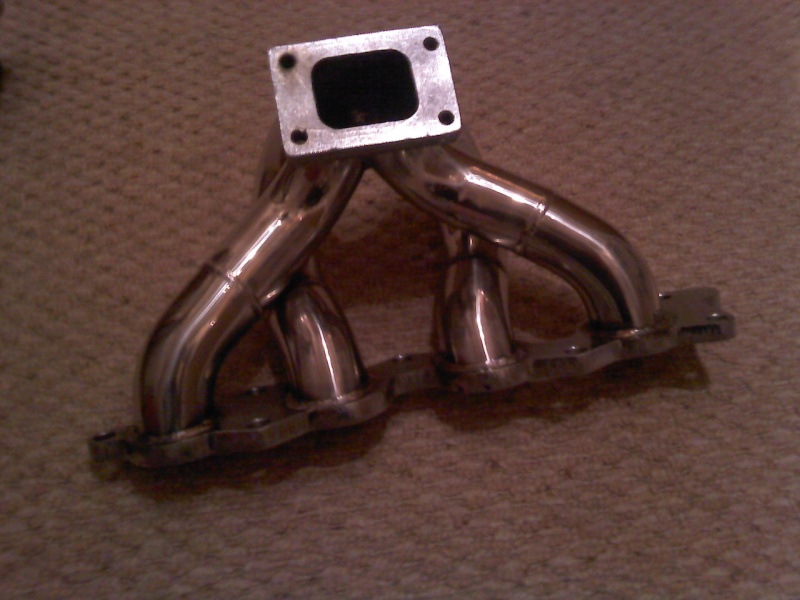 like this i brought 1 a few weeks ago, i didnt get charged import tax and was here in just over a week!

shame its a t25/t28 flange, i didnt think to ask if they could change it so im gunna have to pay extra to get it changed here.

does the timing or ignition need changing?

STEVEGTI2 wrote:whats wrong with a t25 t28 flange a t25 is perfect for a bolt on set up and a t28 for big power or a gt28rs will give you more than you will ever need its a 400+bhp turbo

I've just checked and the cast manifold i'll be buying is t25/t28.......
What turbo could I buy that will bolt straight up and be bought fairly cheap, surely a gt28 etc would be waaay too much, I will will be running standard internals/head gasket afterall, would I not need something a bit smaller?

Sorry for all the questions and cheers at the same time

Just minus the manifold, will keep my eyes peeled for a bargain if so.
Ps you need a thumbs up smiley

STEVEGTI2 wrote:
whats wrong with a t25 t28 flange a t25 is perfect for a bolt on set up and a t28 for big power or a gt28rs will give you more than you will ever need its a 400+bhp turbo

Not much to update, still waiting for this bulkhead mount to arrive, I've also found a gearbox mount.
What's the boost set at on the chips you have for sale?
I've found a set of orange 315cc volvo injectors, would they be any good?
cheers
danny

with the chip boost is 10psi standard everything else ! concentrate on clutch gbox etc turbo chips are now sold out however still avalible at the regular price

I intend on changing the clutch anyway but does it have to be "uprated" or will a new standard one do?
Bit of an update, changed the wheels as they were all bent and scrapped the old ones,
My mate who owns the white one below had these lying about so I have lent them untill I can find a set of integra type r wheels for cheap.
Fitted the poly bulkhead mount, a noticeable difference in noise/vibration in the car but still has a knackered gearbox mount, so will do that this week.

Also removed the full exhaust and my same mate had a full powerflow system in garage and kindly gave me it. The last one was bodged all over and has even had twin exit pipes at some point in it's life.
I'm not keen on the upswept tailpipe at all and tbh if I could I'd swap it for a standard system just untill i've sourced all the bits for the turbo conversion.
It's actually starting to drive like a swift gti and not just a sketchy 90's tin can.

The worst thing is we've just sold our ep3 type R and this is our daily/workhorse but
it's starting to grow on me now.........
few pics anyway 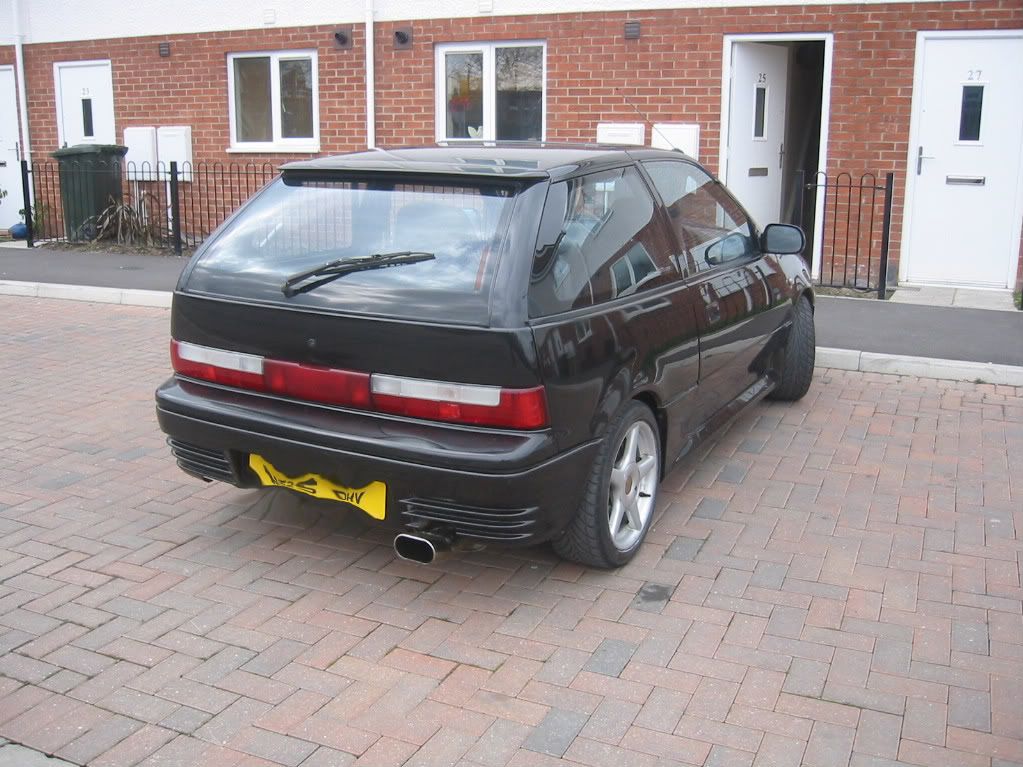 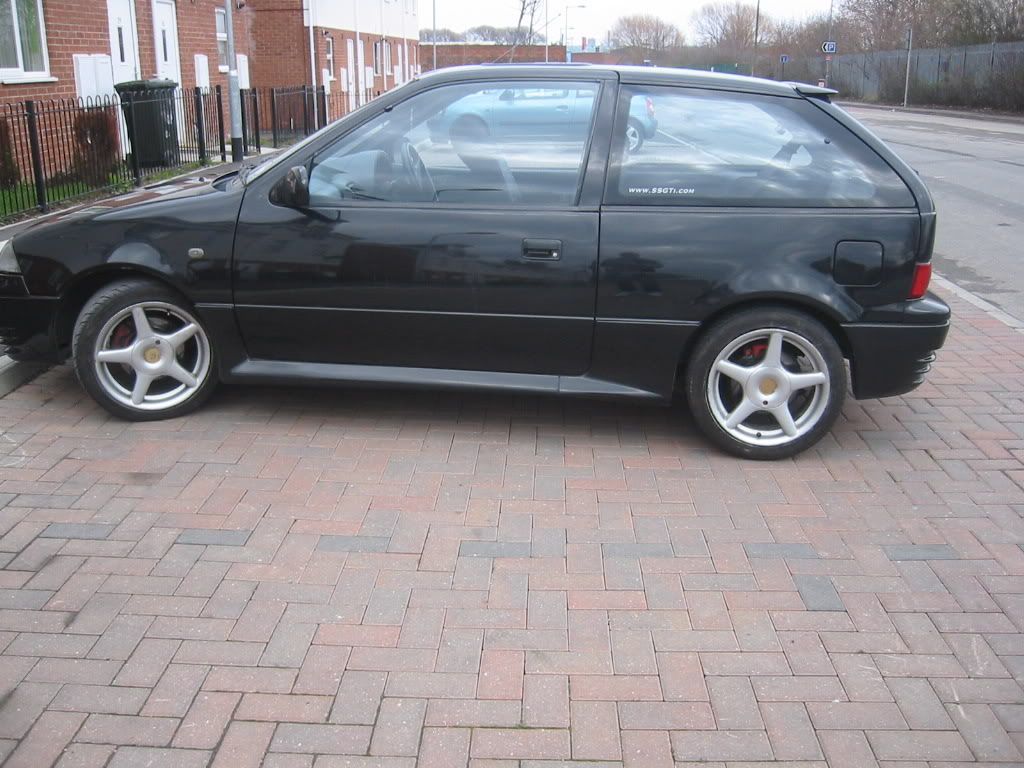 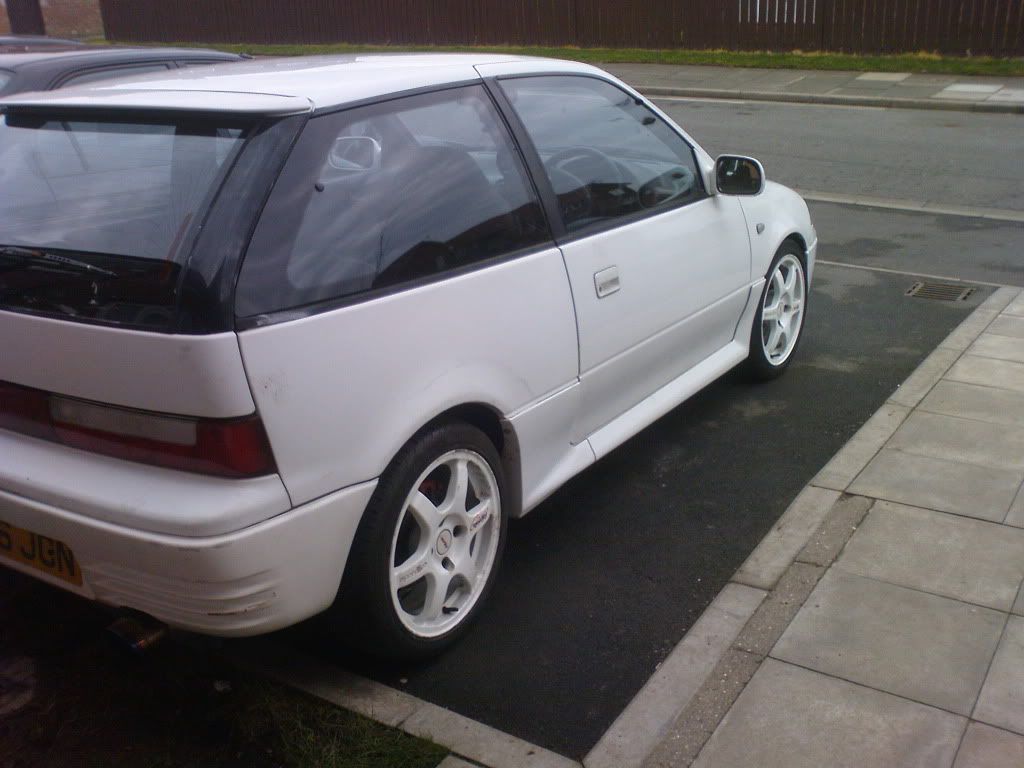 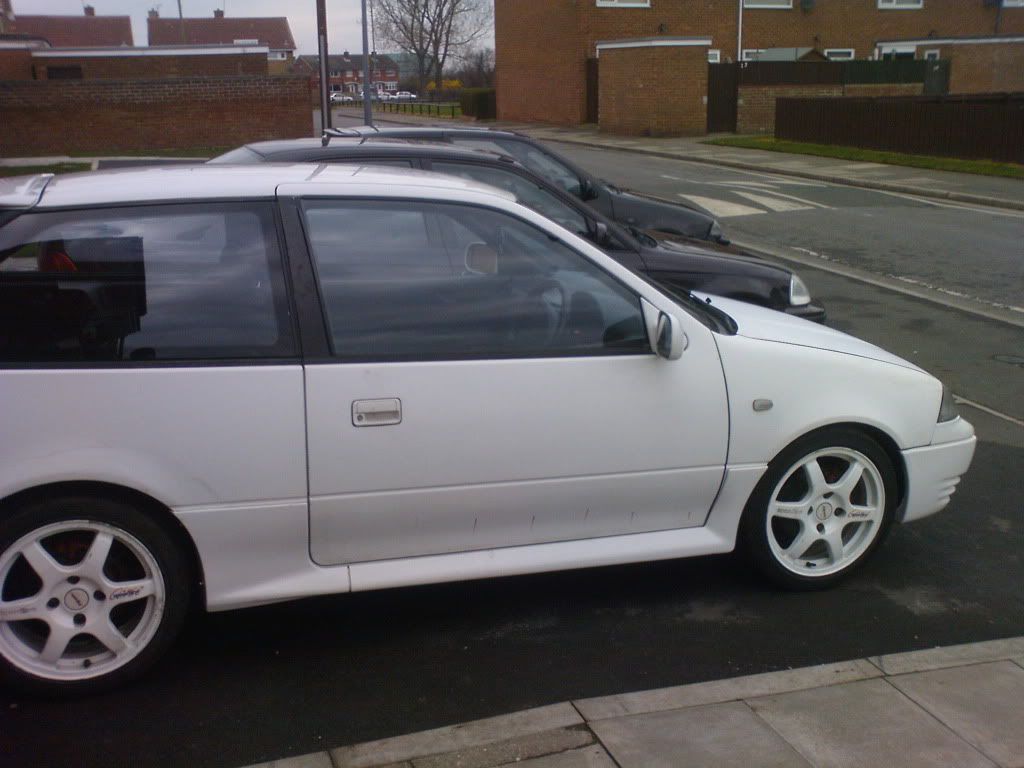 iv got those speedlines in gold

What size are yours?the white ones are 16". Look very nice imo
gary