home of the boosted gti

26/02/2012 - Car is still available, please get an insurance quote before contacting me, I'm getting a lot of timewasters that can't get insured on it. And no I will not swap the engine back to a GLS, no I will not put the rear discs on or do anything else that will cost me money, its £500 for a full car when I've seen engines going for £250. I've just spent near £300 on it so its almost not worth selling!

Right, time has come to get rid of the swift. I've owned it for nearly 8 years and its time to say goodbye sadly.
Started life as a 1.3 GLS now running a GTI engine from a J reg. Did the conversion last year, car had 72,000 miles on and engine had 72,500 so very handy for remembering mileage on engine. Engine runs fine, no smoking even on startup and uses no oil at all! Now at 83,000 miles but used as my daily so will go up. Never let me down in the 8 years and 40,000 miles I have done in her! *touch wood*

I have just put 6 months tax on it and will most likely have 12 months MOT on.

Modifications include:
-stainless mid section exhaust with standard backbox to keep it nice and quiet
-lowered approx 40mm
-dotz 15" alloys with BF goodrich rears (think about 5-6mm), probably a brand new set of Uniroyal Rainsport 2's on the front.
-Suzuki sideskirts, never seen them on any other car, I think they suit it to a tee!
-GTI front brakes with green stuff pads
-GTI bucket seats

Needed some welding doing on the sills, bit of rust on a couple of arches as well as tailgate and the bonnet. Exhaust could do with being replaced, not blowing or rusting just joins arn't fabulous. Maybe could do with a new hub but seen one for sale on here for £20, had a new wheel bearing fitted but think the hub has seen better days.

Just trying to be honest with everyone!

Looking for £500, or £600 with a spare GTI engine, rear discs, hubs and suspension (disc conversion). Also have the original GLS engine, a box of wiring from both the GLS and GTI including a mk1 ecu and vacuum advanced dizzy and a box of bits and bobs (hoses, mounts etc) which I will include for an extra £50.

Will consider part ex either way/swap for something cheap to run or perhaps something fun.

Latest photo with standard exhaust on, photo is a bit poor until I get chance to take some proper pictures. Do have a straight through single tip backbox that is tasteful but loud, can throw that in if anyone wants it. 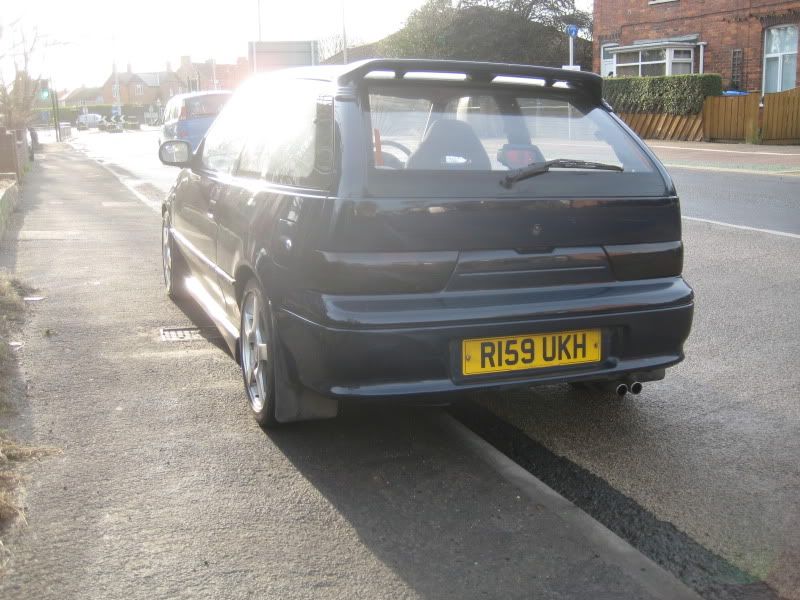 Now fitted with 2 brand new wishbones, all welding has been done and getting tyre fitted today.

As Ryan said, I'm in Beverley near Hull.

Just put a new lambda sensor on it as well.

really wish the insurance would not butt fuck me because its had an engine swap and it would be mine :'(

Lol, yea insurance does absolutely suck! Although I think I'm just about at that age when its reasonable, paid about £4-500 with all mods declared on the swift with adrian flux if anyone wants to get a quote.

I know I could put it up for more but I'm trying to be realistic, people don't want to pay the money for these cars. Yea tell me about it, can't believe how expensive parts are for these! New MOT laws say if the boot is split in the ball joint it needs a new one, yet you have to replace the full wishbone which is about £40 each!!! Not like VW, £5 per ball joint or something crazy! But I would prefer to sell a car so someone can get in, drive it and enjoy it.

Is this still for sale?

yes, this is still up for sale.

where u located?? n what u want for whole car? my shell is rotten!!!!

I'm about 5 miles from Hull in Beverley. What do you mean for the whole car? Its a full car as it is!

Bump, this is still here and still going strong. As much as I don't want it gone I could really do with a nice donkey diesel, so will listen to sensible offers

dads interested as cheaper daily....currently gets around 15-18 mpg lol

Yes, has 10 months MOT and 3 months tax I believe.

I'll be open with you, it has been using fuel recently ever since I put a cheapo lambda sensor on it, think its working out to be between 25-30mpg but I reckon a decent lambda sensor will sort that.

Hey there, is the swift still for sale?

Interested in buying, could you PM me your number please?